Why I Quit My Reselling Side Hustle

Why I Quit My Reselling Side Hustle

I often get called ‘the side hustle queen’ or some similar derivative that praises my ability to produce an income on the side of my full time job in creative new ways. I’m a big advocate for ‘side hustles’ – though I’m still waiting for a better, less nauseating term to present itself – not for the mad ‘hustle’ culture or the belief that everybody should be trying to earn more money. Not at all. I love side hustles because, for me and some others (note, not all others), they can be a fun way to upskill or hone your craft on your own clock, and generate income from multiple sources, so that if one fails (i.e. redundancy), you’ve got something else you can pick right up. I guess I feel like because I work in a creative industry, my side hustles afford me an element of income security and growth potential that isn’t readily available in my day job.

But while side hustles are great and I’m often praised for my success in operating them, I want to normalise the act of deciding that one – or every – side hustle isn’t right for you.

In April 2019, I started reselling second hand fashion online. I’d scour markets, thrift shops and my own wardrobe for clothes, and sell them online for an admittedly small profit. In March 2020, I temporarily closed my Instagram store, Midsize Thrift ,under the guise of it being a corona-related disruption, and have been slowly arriving at the decision that that temporary closure would become permanent.

Did I fail? No, not really. It was definitely a lot of work when you compare to how much money I made, but to be honest much of it didn’t even feel like work. My decision to quit my side hustle was multifaceted and personal, but most importantly, quitting my side hustle was just fine.

I’ve had side hustles in the past that I’ve decided not to carry on – I talked about some of them in my blog 11 Times I’ve Failed.

Today I’m continuing my pursuit of normalising quitting, ‘failing’, and putting yourself ahead of your publicly perceived worth, by deep diving on why I quit my reselling side hustle.

One of the first initial signs that my reselling business was on the downward spiral was when our plan to move into a bigger apartment was halted. At the beginning of the year, we had planned to jump ship to camp ‘rentvest’, and rent out our one bedroom apartment that we own, while renting somewhere bigger.

Having a spare room in which to store, shoot and organise the business was somewhat paramount to its viability. When this plan was halted by a number of factors, I started to question whether it was all worth it.

To add to all that, working 8.30-5 Monday-Friday meant that shooting products had to be done in evenings and weekends. All very well in summer when it’s daylight until 9pm. Trying to shoot in the darkness of Melbourne winter at 6.30pm on a Tuesday was more hassle than it was worth.

Reason number two: I could never quite wrap my head around the ethics of it

My reselling side hustle began as an extension of The Broke Generation. I wanted to bring designer and high end clothing in midsize styles (12-16) at the price of fast fashion, without the harm to the environment. It made sense to me, and that angle served me well. I got good at sourcing silks, linens and cottons as alternatives to polyester and acrylic, and was delivering staple pieces to my customers for less than a pleather dress from Nasty Gal.

What I couldn’t quite swallow was why I felt so guilty when I’d haul armfuls of clothing onto the counter at a thrift store. I’d always find myself trying to come up with a cursory mention of how the clothes were for me or my friends or anything other than being a monster reseller who dares to make a couple of dollars on a top they’d underpriced.

On some level I agree with the idea that there’s truly nothing wrong with reselling at this point in the slow fashion sector. Only 15% of clothes in op shops gets sold, with the rest headed for landfill, so if a reseller can help find homes for more clothes, why not?

But there’s also the privilege argument. The one that, deep down, I know is at the root of the icky feeling I get when I’m buying stuff to resell. I know that some people rely on thrift shops to buy quality clothing, because they can’t afford to otherwise. By buying things to resell, I’m taking away from the people who the charity shops are intended to help, either directly or indirectly. And that was really the nail in the coffin for me. If I can’t even articulate to myself why I believe it’s not unethical, then I definitely couldn’t to someone else, and therefore probably shouldn’t be doing it.

Reason number three: you don’t have to monetise everything

Anyone with an entrepreneurial streak will feel me on this. There’s this weird hunger inside of you to turn everything you love into a business. Not in the sense of greed or a desire to be sickeningly rich – though I do think that’s a common misconception. It just happens. It happens in your brain. You can’t unsee the potential once you realise it. And while in many ways it’s a great skill to have, it’s also very hard to silence.

What I’ve come to realise is that I can still enjoy thrifting, I can enjoy slow fashion, I can still get the thrill of finding exactly what I’ve been looking for but in preloved condition and at a fraction of the cost – just without worrying about admin and profit & loss and branding and taxes.

Reason number four: it was taking away time for the things I was truly good at

It’s that pesky entrepreneurial streak again, but my decision to start reselling meant I was giving up time that could be spent doing what I actually do for a living. I freelance on the side of my day job, and that’s a two fold side hustle because not only does it bring me extra money, it lets me hone my skills at a faster rate than I would just doing it at work. Plus, it adds to my resumé and just generally adds to who I am as a professional person.

Reselling didn’t deliver that same alignment. It was more time consuming, less profitable and not particularly aligned with my overall career and personal goals. When I realised that, the decision to wind it up became pretty clear.

There were other logistical reasons, too. The hassle of finding a stain you hadn’t spotted. The complexities of tax when selling products rather than services. The constant fear of a parcel getting lost and the complete lack of support for businesses in that situation. All realities of reselling, yes. But achievable on the side of a full time office job, not so much. Not for me, anyway.

I guess what I want to be clear with this blog is that changing your mind is okay. Realising you’re wrong is okay. Realising you were feeding off other people’s praise and deciding to change as a result is okay. Quitting because something isn’t right for you is okay. You know what’s right, and knowing you know what’s right and acting on that gut feeling is one of the greatest skills of all – even if it doesn’t turn a profit. 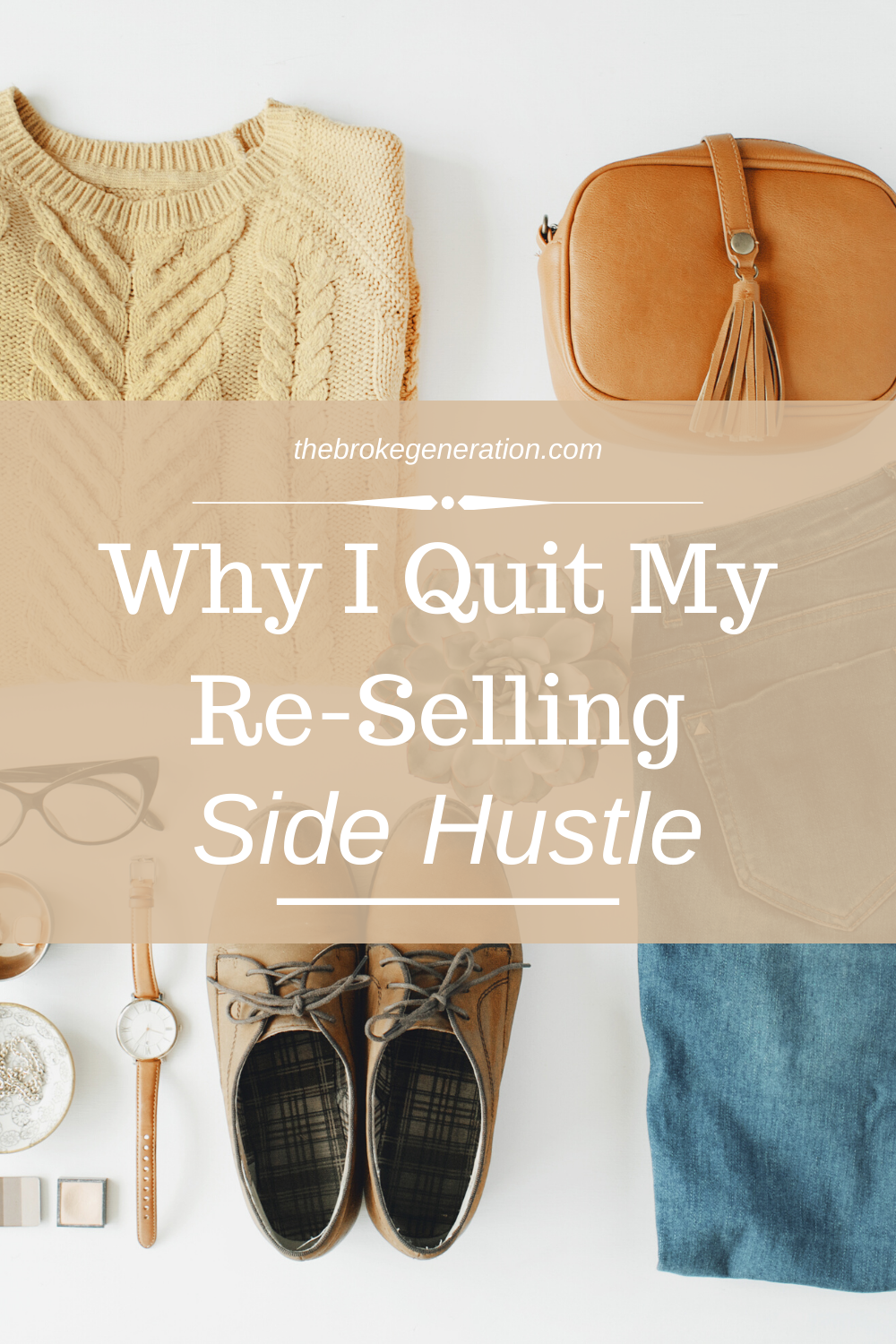