Air New Zealand Skycouch: How Much Is It and Is It Worth It?

Air New Zealand Skycouch: How Much Is It and Is It Worth It?

This article is not sponsored by or affiliated with Air New Zealand. This is based on my own personal experience.

We recently flew with Air New Zealand to America, and on our return leg upgraded ourselves to the Economy Skycouch experience.

If you’re not familiar with it, Skycouch is Air New Zealand’s answer to luxury in economy. Some of their fleet is now fitted with specialist Skycouch enabled rows in the economy cabin. The seats are essentially the same, but they come with a footrest that can be elevated to make a fully flat surface between your seat and the seat in front of you.

When you book a Skycouch, you’re booking that entire row of three, on which you can pop up all 3 seats and make a flat bed. You’re also provided with extra cushions, blankets, a special seatbelt for sleeping, and a mini “mattress” to lay flat on the seats for extra comfort. All the arm rests (including the window seat one!) can also be folded back.

How much does Air NZ Skycouch cost?

For the two of us to share a Skycouch from LA to Auckland (12.5 hours), we paid $549AUD. For the purpose of this article I sniffed around for a more accurate idea of how the pricing works, but unfortunately it depends on the route and the demand on that specific flight. 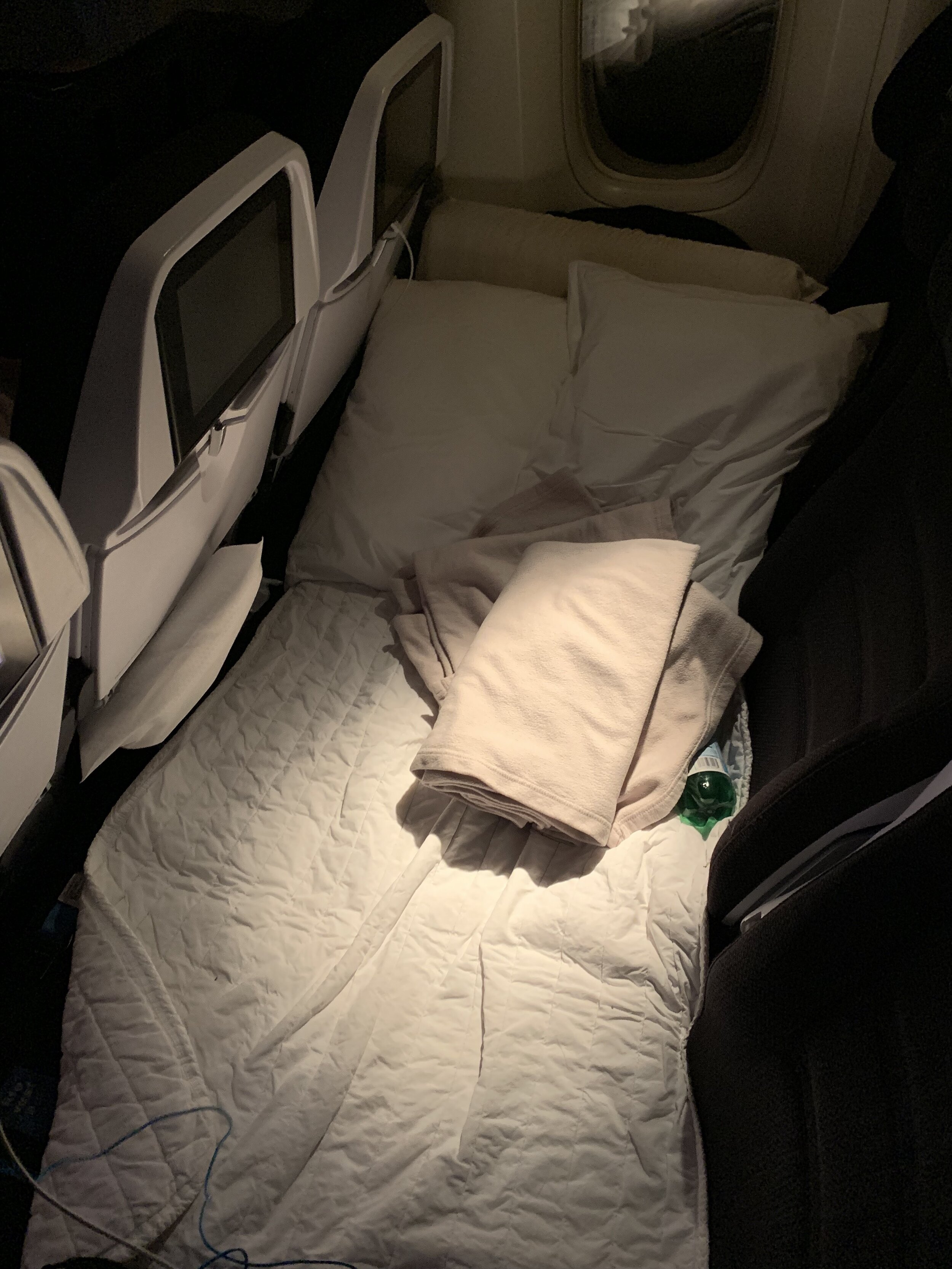 Is the Air NZ Skycouch big enough for two?

This was one of my main worries when I slammed down the $549 fee. Would it be big enough for the two of us to sleep any better than normal? As a notoriously bad sleeper, it takes serious comfort for me to be able to drift off. I’m no stranger to landing after a full 28 hour flight with zero sleep whatsoever. But on the Economy Skycouch, I slept for 9 hours of a 12 hour flight.

Don’t get me wrong, it was a squeeze, so if you want to lie flat, it’s pretty essential that the person you’re sharing with is your significant other! You have to shuffle around a bit to find a position that you can both fit into, and of course, you can’t stretch your legs all the way out – you’d be in the aisle otherwise.

I’m about 172cm tall and Mr TBG is about 178cm, and we fitted just fine. For us, the best way to sleep was with our backs to the seats in front, facing the back of our seats. We’re not the slimmest people in the world, but we’re also not large, so I’d say people smaller than us would be fine, but anyone much larger or taller might find it less comfortable as a two, and be better suited to one to themselves.

Is the Skycouch worth it?

I have back problems, which means I usually find flying in economy really uncomfortable. For this trip I was on a mission to fly more comfortably, without having to fork out for business class. The Economy Skycouch was the perfect middle ground, given the price and comfort levels.

I actually really loved having the Skycouch for overall comfort, even when we weren’t laying flat for sleeping. Being able to cross your legs or stretch out across all 3 seats while watching movies or reading was such a luxury, and it just felt far less squished than a standard economy seat.

Sometimes, you’ll get seated in a Skycouch seat, when you haven’t booked it. If nobody books the Skycouch upgrade, the seats are just used as normal economy seats – but you still get access to the footrest!

If you’re lucky enough to be seated in the row on your own, you’ve won the jackpot. You can pop up all 3 seats and lie flat, though if you haven’t paid you won’t be given the special seat belt or the extra pillows and mattress.

If you’re seated in a Skycouch row with other passengers, you can still pop up your footrest half way or the whole way, and enjoy a little extra flexibility in your seated position. On the flights that we didn’t book the full Skycouch row, we paid a ‘preferred seating’ fee in advance ($10 for the shorter flight and $39 for the longer flight) to have seats in the Skycouch row. We had someone in the 3rd seat each time, but we still popped up our footrests for extra comfort. If you don’t want to fork out for the full upgrade, I’d definitely recommend paying to sit in that row with preferred seating. We did this by calling Air New Zealand directly, and it was the best investment for a much comfier flight.

Rebalancing your budget = tuning into whether your

I'm a sucker for throwing money at a problem or an

Timing is everything. Despite the fact I've got my

[AD] GIVEAWAY: Why have I been grunting and wheezi

💰Not for the gender/disability/ethnicity pay ga

More savings, less effort. Can I get a hallelujah?

THE CRISIS MANIFESTO WORKBOOK OUT NOW! $10 for a limited time. Dismiss