Ever wonder where you got your penchant for shoes and expensive cocktails?

1.Shopping is a legitimate hobby

The Sex and the City women, Rachel from Friends, The Olsen Twins – I looked up to all of these (albeit fictitious) women who led me to believe that shopping was a legitimate hobby. Scrawling it across my Bebo profile, I grew up with the narrative that shopping was one of my favourite pastimes. I loved strutting around town with fancy cardboard bags dangling from the crook of my arm and pretending my smalltown teen years were instead cast against the backdrop of New York City. Inspired by this glamourous financial sabotage, at 19 I jetted off to the big apple with a friend, with shopping number one on our list of to-dos. TV shows and movies that glamourise shopping as a girl’s best friend are simply teaching us that spending money and consuming products for the sake of it is a realistic way to live.

2. You can always afford a really big apartment in the heart of town

Monica and Rachel’s lofty open plan apartment with a balcony bigger than my current bedroom definitely set me up with some unrealistic expectations of what city life would be like. Funded on the salaries of a coffee house waitress and a chef (aka two of the crappest paid jobs known to man), it’s no wonder I got a shock when all I could afford in London was a single room the size of a postage stamp above a cafe with mice in the walls.

3. Public transport is gross and cabs are better

Sitcom New Yorkers always turn their nose up at public transport and hop into cabs – even today on more progressive shows like The Bold Type, we see women working for a print magazine (aka a painfully competitive industry that’s laying people off on the daily) slithering out of cabs clutching a paid-for coffee just in time for the morning meeting. I wish there had been a show that explained that paying $10 for a train that’s 20 minutes late and squashing on armpit-to-armpit was literally the only option for getting to work on a regular salary.

Whether lazing around coffee houses on a seemingly normal weekday afternoon (where your boss is obviously completely cool with you taking an extended lunch to inhale cappuccinos with your friends) or strutting up and down busy streets clutching a takeaway cup, being permanently glued to cafe-bought coffee was sold to us as a gleaming beacon of success. I’ve got vivid memories of gagging over my Mum’s kitchen sink aged 14 as I tried with all my mite to become a coffee drinker. Why? Because of Gilmore Girls. The second I matured my taste buds to accommodate the bitter warmth of coffee, my morning visits to Starbucks began. You know, because it was just SO Carrie Bradshaw. Nobody ever mentioned it was just SO ruining my entire financial future.

5. Takeout and flashy bars are the norm

American sitcom characters would always spend Saturday nights gathered around Chinese takeout (in super cool noodle boxes rather than the crappy plastic that real world takeaways seem to come in) or thoughtlessly dialing in pizza and ice cream after a hard day. Nobody ever mentioned that a pint of Ben & Jerry’s costs almost an hour’s wage, or that ordering in pizza is 11x more expensive than cooking the one in your freezer. Meanwhile, Sex and the City gals would spend night after night ‘going out for sushi’, going to new bar openings or guzzling cocktails while gazing over an expensive-looking skyline. Let’s not forget that Carrie did little more than sit at her Apple Macintosh and “wonder” for a living. 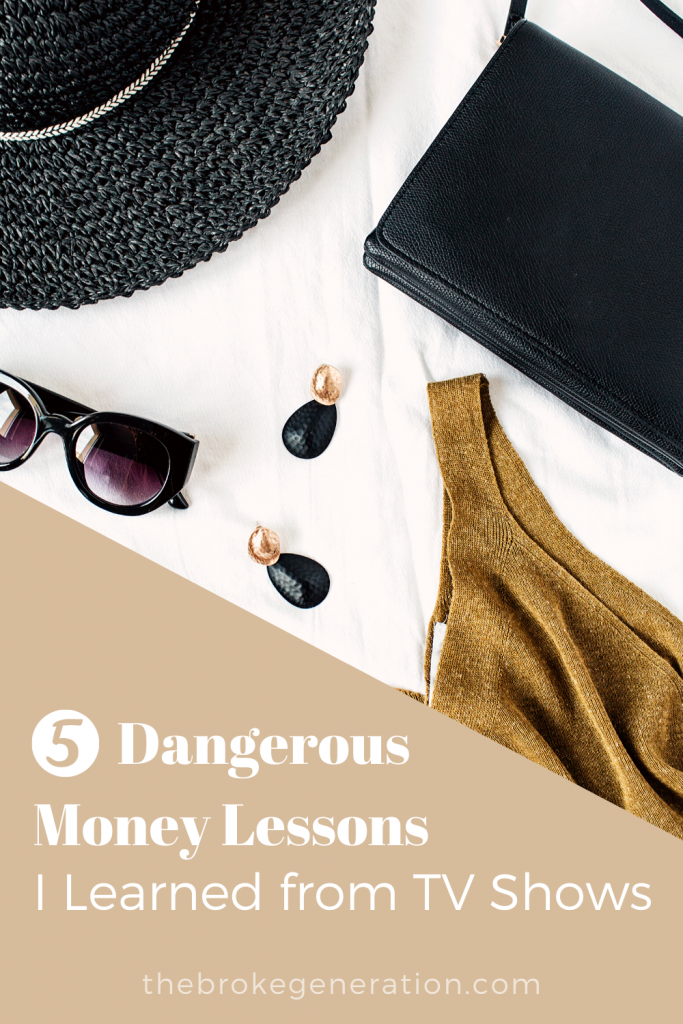 WELCOME TO THE BROKE GENERATION NEWS BULLETIN in p